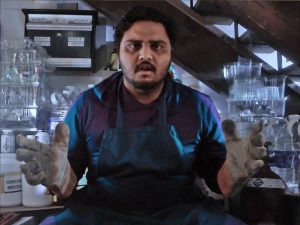 Professor Marty is a documentary film teacher who thinks he has the worst class ever. Now he has to explain himself to the department chair who’s come to watch his student’s final projects. Will it be the last class of his career?

Shy Guys: Two strangers (2016 Tony winner Reed Birney and newcomer Blake DeLong) bring the laughs as they confront and resolve one of the most insidious scourges afflicting mankind – while standing at public urinals with their willies out. The first film by ubiquitous character actor Fredric Lehne.

Rekindled: After a string of failed relationships, successful career woman Kate gets the chance via a magical Groupon to rekindle romance with the love of her life — her high school boyfriend. But as she soon discovers, the 40% discount is there for a reason…

The Consequences of Spooning: After breaking up with his girlfriend, a man finds he can no longer sleep.

Proposal: Chris is a recent college graduate who proposes to his “girlfriend”, Heather, in the middle of dinner, but she’s hesitant. Chris’s best friend Dennis comes in to back him up, and it’s a battle between the two sides to discover why she won’t accept, while also uncovering shocking accusations from Heather.

Door to Door: When a door-to-door salesman shows up selling time machines James is forced to revisit some of his memories and reevaluate his life.

Manhunt: After Sindy’s boyfriend Paul accidentally dies, she pulls out all the stops to find herself a new fella.

The shortest are always the best!: Film with sketches in the form of three amoral fables with epilogue in which the characters will learn at their expense that it is better to consult or to think before acting.